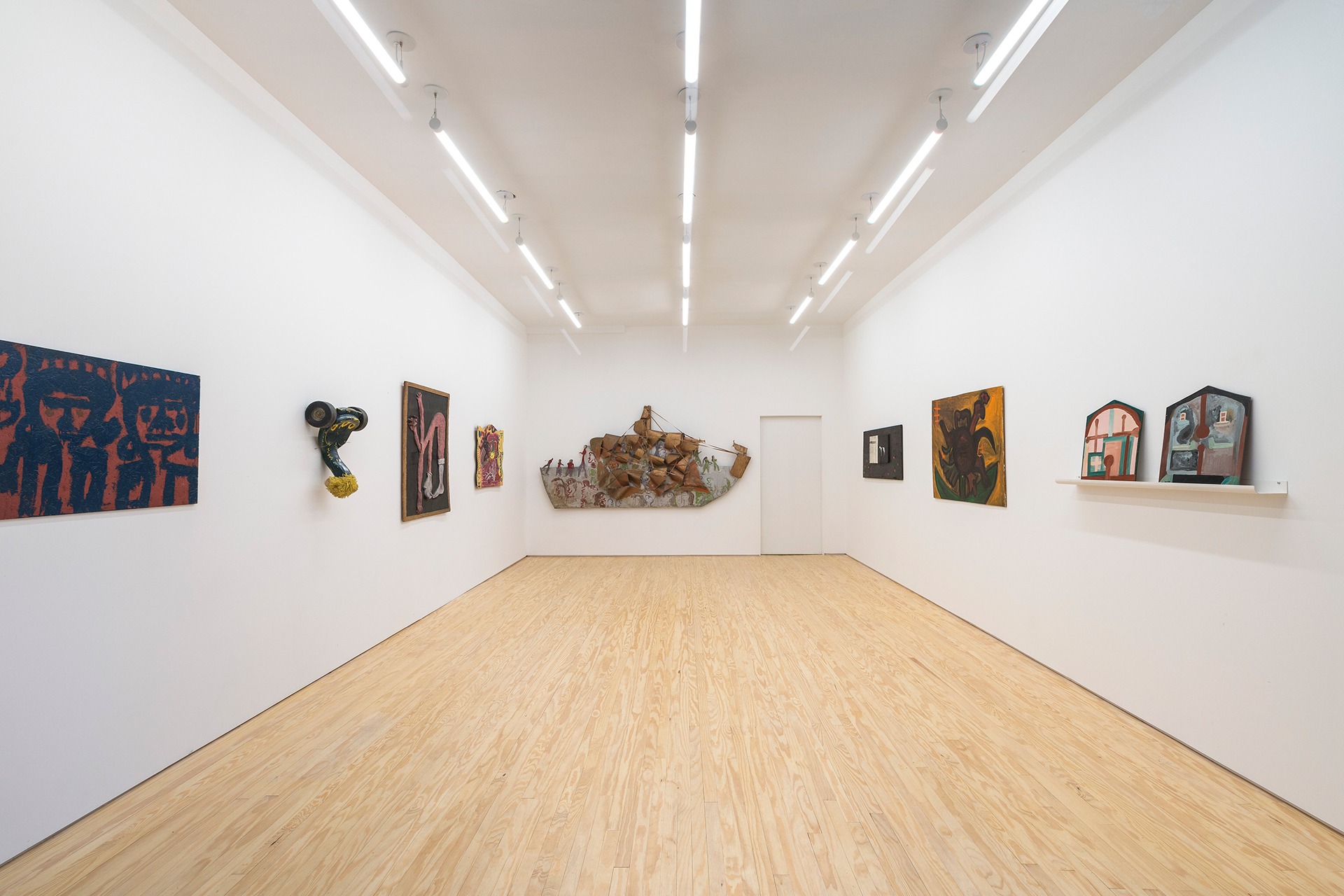 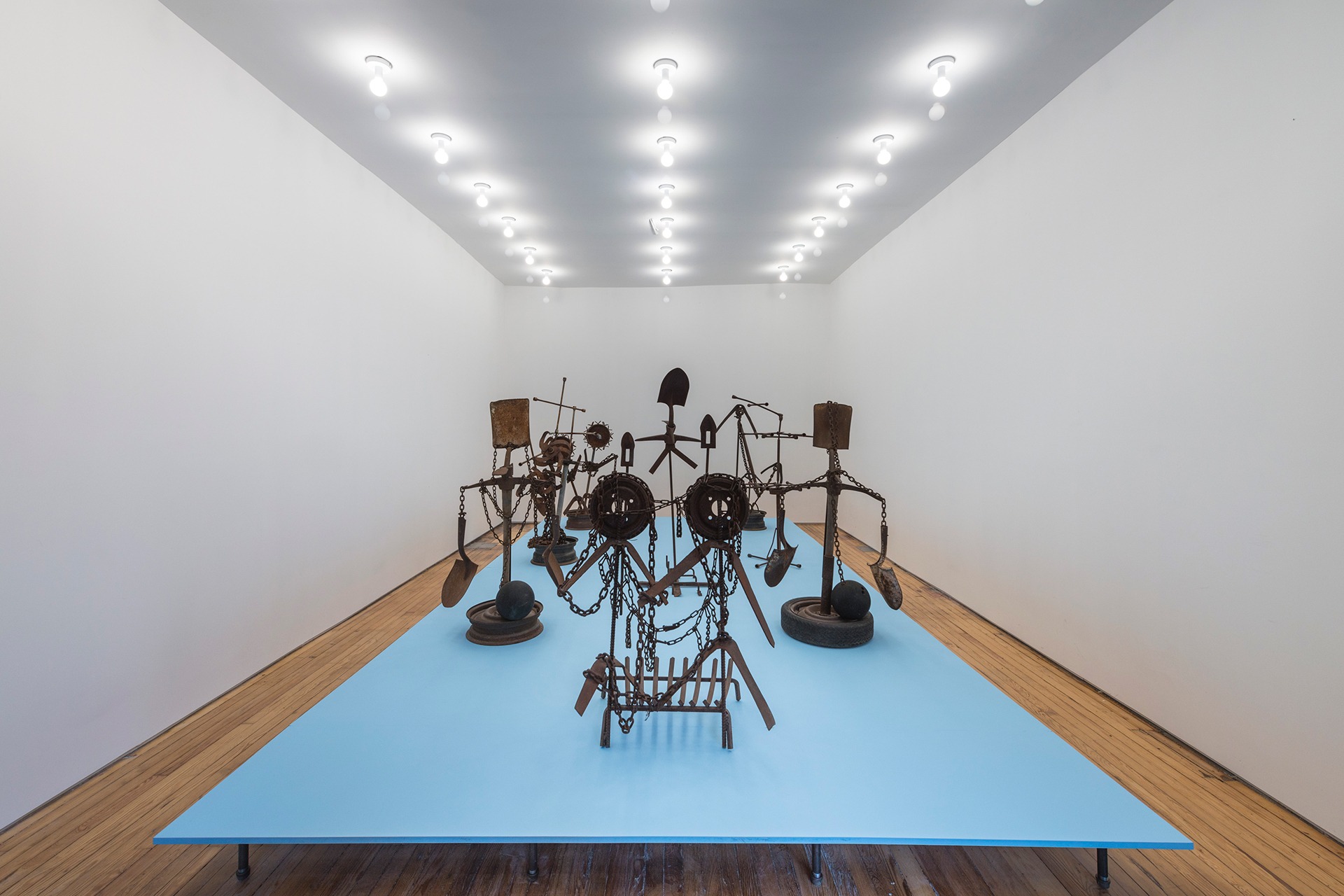 We Lost Our Spears

Once That River Starts To Flow
Joe Minter
Atlanta Contemporary
2018

In the Presence of Our Ancestors: Southern Perspectives in African American Art
Minneapolis Institute of Art
2021

When Stars Begin to Fall: Imagination and the American South
Studio Museum
2014

Coming Home: Self-Taught Artists, the Bible, and the American South
Art Museum of the University of Memphis
2004

Joe Minter’s (b. 1943) practice weaves celebrations of African American history among religious devotions, illuminating multi-generational experiences of blackness in the United States. In 1989, he began his project titled African Village in America, currently installed in and around his home in Birmingham, Alabama. The ongoing series records and retells history, depicting the sacrifices and contributions of African Americans. A smorgasbord of found objects and recycled gadgets, the sculptures refer to a long and dedicated fight for equality. While Minter’s most recent work takes on the murder of George Floyd and the Black Lives Matter Movement, he has been tackling such matters for decades. Ancestral African culture, the horrors of slavery, the triumphs of the Civil Rights Movement, the courage of African American soldiers––these histories are interwoven within Minter’s archive, inviting divine mercy and striving for peace.

Joe Minter (b. 1943) lives and works in Birmingham, Alabama. Previous solo exhibitions include Joe Minter, Sculpture 1995-2012 at James Fuentes Gallery (New York, NY) in 2019 and Once That River Starts To Flow at the Atlanta Contemporary (Atlanta, GA) in 2018. His work is included in various public and private collections including the Metropolitan Museum of Art (New York, NY), the Souls Grown Deep Foundation (Atlanta, GA), the Smithsonian American Art Museum (Washington DC) and the High Museum of Art (Atlanta, GA), among others.

His work has been included in In the Presence of Our Ancestors: Southern Perspectives in African American Art at the Minneapolis Institute of Art (Minneapolis, MN) in 2021, History Refused to Die: Highlights from the Souls Grown Deep Foundation Gift at the Metropolitan Museum of Art (New York, NY) and Revelations: Art from the African American South at the De Young Museum (San Francisco, CA) in 2018, and the groundbreaking Souls Grown Deep: African American Vernacular Art of the South at the Michael C. Carlos Museum (Atlanta, GA) in 1996.

The Brooklyn Rail
March 22, 2022
Joe Minter: We Lost Our Spears
By William Corwin

The Guardian
December 10, 2020
Hanging trees and hollering ghosts: the unsettling art of the American deep south
February 5, 2020
By Lanre Bakare

Artnet
November 25, 2020
‘Self-Taught Black Artists Are Often the Last to Benefit When Their Prices Go Up. But We Can Change That––Here’s How.
By Maxwell Anderson

Medium
July 10, 2020
Art in a World of Social Change
By Sarah Buklan

Artnet
January 20, 2020
What Art Defined the Civil Rights Era? We Asked 7 Museum Curators to Pick One Work That Crystallized the Moment
By Katie White

Receive the latest news and updates from MARCH

Thank you for following along with MARCH